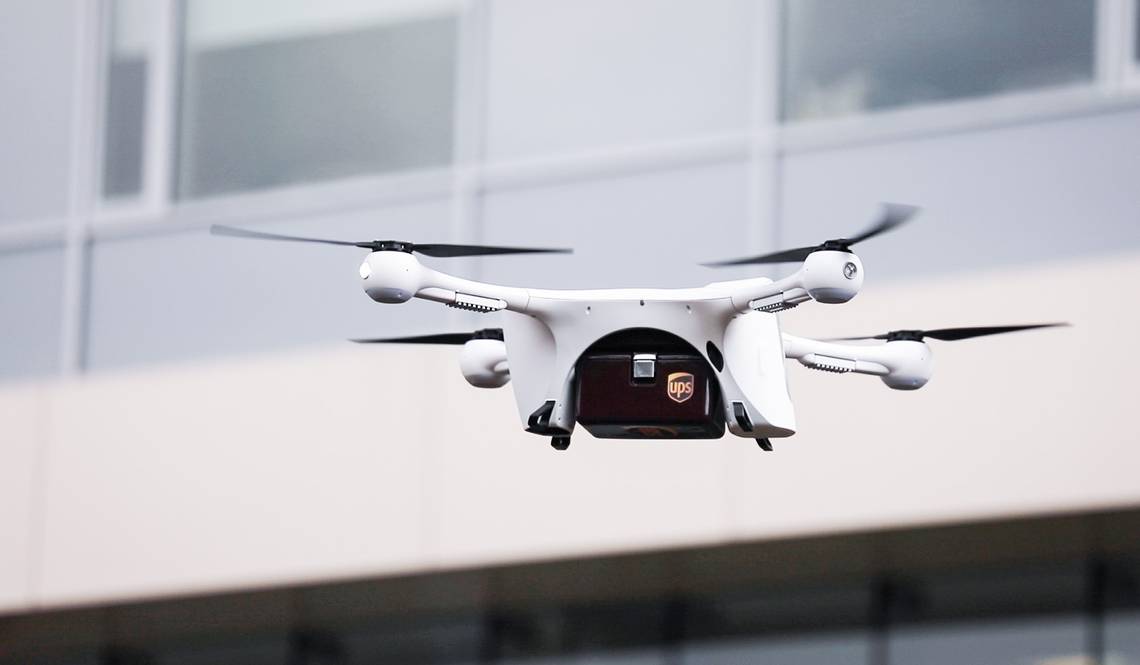 A white drone with four rotors appeared over the roof of WakeMed’s main hospital on Tuesday morning and landed outside the front doors carrying a small brown box with a UPS logo on the side.

The flight marked the first regular commercial delivery by drone in the United States that was approved by the Federal Aviation Administration. UPS will use drones to deliver blood and other lab samples from WakeMed hospitals, clinics and doctors offices to its main lab in Raleigh.

Known for its boxy brown trucks, UPS will be using drones made by a California company, Matternet, whose battery-powered M2 quadcopters can carry loads of up to 4.4 pounds.

For now, the deliveries will be limited to short hops between WakeMed’s main hospital on New Bern Avenue and a medical office park across Sunnybrook Road. In a demonstration flight last August, a Matternet drone carried several vials of water 1,377 feet from a parking lot in the office park to the roof of WakeMed.

Tuesday’s flight was longer — about a third of a mile — and took about three minutes. UPS and Matternet initially expect to make about seven of those flights a day, delivering samples to WakeMed’s central pathology lab in the hospital.

Eventually, UPS and Matternet hope to master the logistics and win government approval to make drone flights as long as 12.5 miles, the full range of the M2 drone. The N.C. Department of Transportation has been working with Matternet and WakeMed on developing the medical delivery system, under a test program authorized by the FAA to help determine how drones, or unmanned aircraft systems, might be regulated in the future

FAA rules still bar drone flights beyond the sight of the operator, though the agency has issued waivers as part of the test program. UPS and Matternet say they expect to be able to receive an FAA waiver that would allow them to make daily deliveries from WakeMed facilities around Wake County to the central lab on New Bern Avenue.

“It’s a fluid process, and, of course, when you do this for the first time it’s not easy to predict a timeline,” said Andreas Raptopoulos, Matternet’s founder and CEO. “But I would be surprised if we’re not able to do it this year.”

For WakeMed, drones promise to save time and money on the delivery of lab samples, which now go by car or truck. WakeMed has three full-service hospitals and more than 70 facilities, including doctors offices, scattered around the county.

“We’re looking at significant improvements in lab turnaround time,” said Stuart Ginn, a surgeon who helps lead the Innovations department at WakeMed. “It can take several hours for samples to get to the lab using current methods, and drones can transport samples in just minutes over the same distances.”

WakeMed will get billed for the drone delivery service, but on Tuesday none of the parties involved was willing to say how much.

The flights are monitored by remote pilots, but the drone flies a pre-programmed route automatically. There are no cameras on board, either for the pilot’s benefit or to record what’s on the ground. On Tuesday, the drone descended slowly onto a portable 3-by-3-foot landing pad.

While Tuesday’s flight was a first in the U.S., Matternet has made more than 3,000 medical flights over cities in Switzerland, and UPS has partnered with drone company Zipline to deliver blood to remote parts of Rwanda.

UPS and Matternet say they’ll use what they learn at WakeMed to offer drone deliveries to other hospitals and medical facilities across the country. Raptopoulos said the companies hope to be flying for several hospitals around the country by the end of 2020 and that in time drone medical deliveries will be considered routine.

“Imagine if in five years time we look back at this flight,” he said. “But we’re living in a new reality where there’s thousands of flights happening every day, just improving patients’ lives day in and day out, 24/7, without anybody noticing it.”