#AIoTuesday: The U.S. Army is Bringing AI to Its Armored Vehicles 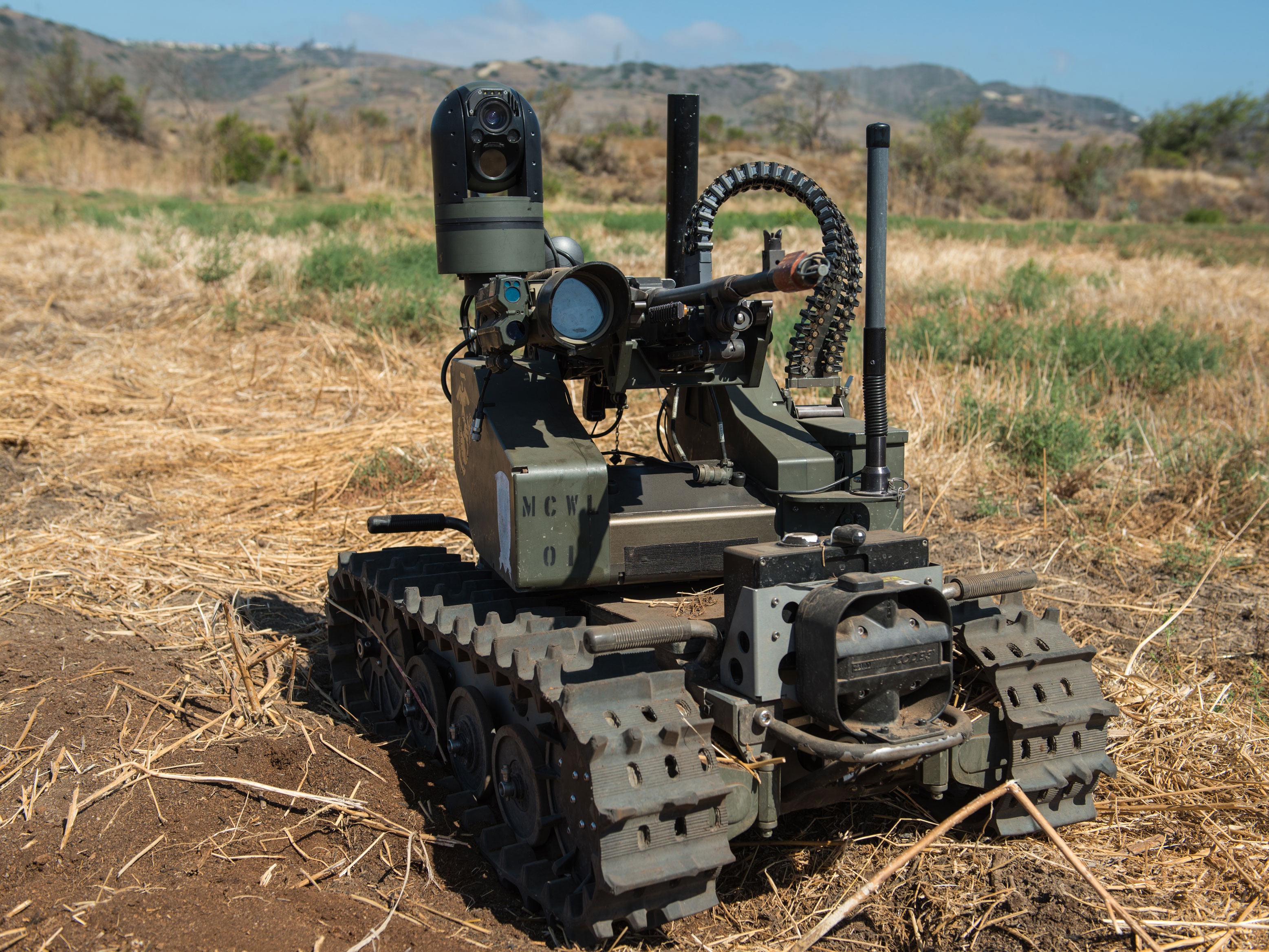 “We are developing an AI stack regarding how we pull together the sensors, computing layer and analytics to manage the data,” Col. Doug Matty, Army AI Task Force Deputy Director, told Warrior in an interview.

“We are focusing on the Next Gen Combat Vehicle. As you know they are progressing with two different platforms – the optionally-manned vehicle and the robotic combat vehicle. How do we have AI-aided threat recognition? We have to be aware of how robotic and manned vehicles share information to conduct operations,” Matty explained.

The first prototype AI-focused integrated threat recognition sensor will be ready by January of next year, Matty said.

The Army Vice Chief of Staff Gen. Joseph Martin told Warrior about some of the prototyping now being done for the Next Generation Combat Vehicle; he said the service is looking at firepower, metallurgical breakthroughs and other emerging systems.

“We’ve got a great team there. They’re looking at the requirements, they’re starting to work to prototype equipment in the future, and that’s going to allow us to arrive at the appropriate solution, just like we did with the Abrams tank back in the mid 70’s,” Martin said in an interview with Warrior.

“We’re looking at new mobile firepower capabilities, we’re looking at leveraging the technology that’s available in the metallurgical development field so that we can have the lightest vehicle possible, but also the most survival vehicle as possible,” he added.

The Army’s fast-moving AI-task force, based in Pittsburgh at Carnegie Mellon University’s National Robotics Engineering Center, was first established by the Secretary of the Army in October of 2018.

As part of a dual-pronged strategy to both rapidly advance technology and analyze its impact upon strategy, doctrine and combat tactics, the AI TF is working closely with Army Futures Command and its Cross Functional Teams.

“We are working through an initial set of mission analysis with the CFT. We are now aligning these efforts with research opportunities,” Matty said.

Army Vice Martin offered some additional detail regarding some of this research.

“We’re looking at new mobile firepower capabilities, we’re looking at leveraging the technology that’s available in the metallurgical development field so that we can have the lightest vehicle possible, but also the most survival vehicle as possible,” he said. .

An interesting 2017 essay from The Hague Centre for Strategic Studies offers some significance context regarding the anticipated operational impact of AI.

“AI systems could provide probabilistic forecasts of enemy behavior, anticipate and flag bottlenecks or vulnerabilities in supply lines before they occur, and suggest mitigation strategies; draw on data (e.g. weather conditions collected by drones), to examine factors affecting operations and assess the viability of different mission approaches,” the essay, called “Artificial Intelligence and the Future of Defense,” states.

Matty and his team are now refining potential applications of new algorithms being uncovered through the Army’s current collaboration with scientists and engineers at Carnegie Mellon — to help bring the vision outlined by the essay to life. There are a number of efforts showing early promise, Matty explained.

Some of these include sensor consolidation, an effort which not only reduces the hardware footprint created by building sensors into armored vehicles but also increases long-range sensor fidelity and organizes otherwise separate pools of data. This, among other things, can introduce new attack options, Matty explained.

“We are working on sensor consolidation. For fire control there are a number of processes that are conducted in advance of finding the entities that you want to generate effects on. How do we leverage enhanced capabilities based on longer-range types of systems and overhead commercial imagery or UAS so we can rapidly perform PED (Processing, Exploitation, Dissemination)?” he said.

Here Matty seems to be referring to how AI-aided algorithms can now immediately sift through drone-video feeds, instantly finding and disseminating intelligence of pressing combat relevance. This kind of information synergy described by Matty is also reinforced by the Hague Centre for International Studies essay, which states that new adaptations of AI technologies can perform “analysis of reports, documents, newsfeeds and other forms of unstructured information.”

AI is also changing the readiness equation, Matty explained, by virtue of accelerating condition-based maintenance on board certain large platforms such as Strykers and Black Hawk helicopters.

“We are working to refine the analytics and machine learning to not only increase the specificity but also improve the time horizon to predict when maintenance needs will occur. We can get to the granular level of specificity, not just for the fleet but eventually for tail numbers,” Matty said.

The Army has been working on conditioned-based maintenance for many years now, an effort which includes engineering and integrating key data-collection sensors onto large platforms. These sensors can, among other things, monitor system health, engine rotations and other essential combat functions in real time – at times even wirelessly – to help commanders anticipate when a given system may malfunction. In recent years, the Army completed a “proof of principle” exercise using AI-enabled wireless technology to download and organize maintenance data from sensors on board Stryker vehicles. Collaborating with IBM, the Army was able to draw upon IBM’s Watson computer to perform analytics in real time to produce indispensable maintenance information in seconds. The Army’s AI Task Force is now working on this on Black Hawk helicopters.

“How can information be analyzed to understand maintenance status? This includes developing new algorithms and interfaces for maintenance and mechanics to address supply chain and logistics challenges and take advantage of recently-available data assets,” Matty said.

Automation and AI, which are of course progressing at near lightning speed these days, are often described in terms of easing the “cognitive burden,” meaning they can quickly perform analytics and a range of procedural functions to present to a human operating in a command control capacity.

Working on the cutting edge regarding both the promise and limitations of AI, the Army’s Task Force is currently grounded in a doctrinal emphasis upon having a “human in the loop.” Essentially, AI and advanced computer processing speed are well suited to exponentially improve procedural functions, the organization of sensor data and other pressing computational operations — yet Matty emphasized the importance of having humans in a role of command and control in order to make complex decisions, reason and best leverage the benefits of AI.

For instance, there are many combat variables which are often a complex byproduct of a range of more subjectively determined variables – impacted by concepts, personalities, individual psychology, historical nuances and larger sociological phenomena. This naturally raises the question as to how much even the most advanced computer programs could account for these and other somewhat less “tangible” factors.

Advanced computer algorithms can analyze data and quickly perform procedural functions far more quickly than human cognition – yet there are nonetheless still many things which are known to be unique to human cognition. Humans solve problems, interpret emotions and at times respond to certain variables in a way that the best computer technology cannot.

This concept, broadly speaking, is mirrored in an interesting 2017 essay from the Chatham House, Royal Institute of International Affairs called “Artificial Intelligence and the Future of War.” (M.L.Cummings). The essay explains how typical algorithms cannot necessarily “generalize” but rather only consider “quantifiable variables.”

“Replicating the intangible concept of intuition, knowledge-based reasoning and true expertise is, for now, beyond the realm of computers,” the essay states.

…….AI is advancing, but given the current struggle to imbue computers with true knowledge and expert-based behaviours, as well as limitations in perception sensors, it will be many years before AI will be able to approximate human intelligence in high-uncertainty settings – as epitomized by the fog of war….. The Chatham House essay states.

Osborn previously served at the Pentagon as a Highly Qualified Expert with the Office of the Assistant Secretary of the Army – Acquisition, Logistics& Technology. Osborn has also worked as an anchor and on-air military specialist at national TV networks. He has appeared as a guest military expert on Fox News, MSNBC, The Military Channel and The History Channel. He also has a Masters Degree in Comparative Literature from Columbia University.

Meetups at Innevation are back, Check out the calendar for January!