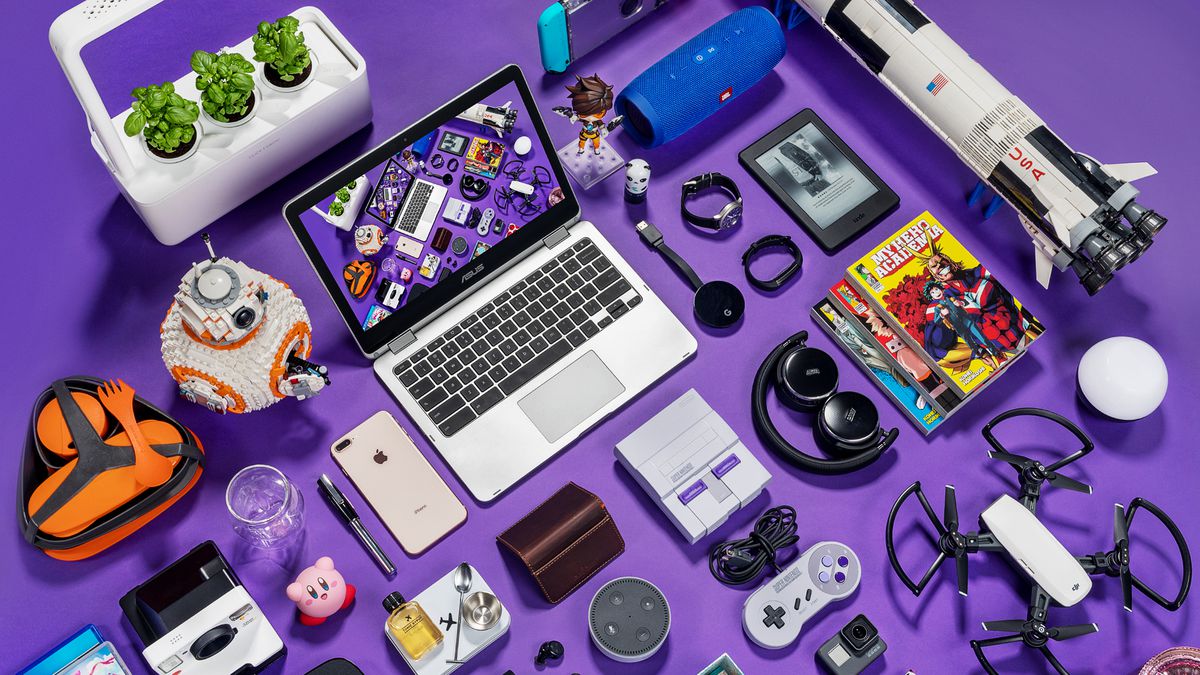 Do you have an older stereo that isn’t compatible with all this newfangled streaming tech? Are you fed up with leaving your phone tethered to an auxiliary port? Not to worry — Chromecast Audio is here to save the day. Just plug it into the aforementioned auxiliary port on your stereo, and connect it to your home Wi-Fi network. Once set up, you’ll be able to sling audio to your speakers using just about any app on your phone.

Looking for a way to dip your toes into the wonderful world of drones, but don’t want to spend a small fortune on an expensive toy you might crash? Check out Hubsan’s x4 Plus Quadcopter. Small in both size and price, this drone is perfect for anyone wanting to break into the UAV scene and learn the basics of piloting a quadcopter. Packing a 1080p HD camera, pre-programed tricks, multiple flight modes, and a huge selection of replacement parts, this little guy will keep you soaring for a long time.

Still charging your phone with a cable like a caveman? Get with the times, brother! Snag yourself a Qi wireless charger and you’ll be free from the shackles of cord-carrying life. Put one of these suckers on your bedside table and just plop your phone on it before you go to sleep. When you wake up, you’ll have a fully-juiced phone that you can just grab and slip in your pocket — no unplugging necessary. Seriously, though, wireless charging is one of those little things that makes life slightly easier, and you don’t realize how awesome it is until you don’t have it anymore.

In an age of constant change, one thing that hasn’t changed much is the light switch. Belkin, however, is trying to change that with its Wemo Smart Light Switch. Once hooked up, the switch allows you to control your home lighting via a smartphone or tablet. With the ability to set a lighting schedule, Alexa compatibility, and pairing options for most connected home systems, your analog flip switches pale in comparison.

Over the past few years, the cost of solar technologies and paneling have dropped to the point where there are now plenty of affordable solar options for those on the go. That said, the ECEEN 13W foldable solar charger is one of our favorite models in existence. The device weighs a mere 9 ounces, and when completely folded, the entire unit measures just an inch thick. There’s a small stand on the backside, too, allowing you to easily prop up and angle the solar charger toward the sun. Now, let’s just pray you don’t encounter cloud cover.

The first Pi launched six years ago and the Raspberry Pi 3 Model B+ is faster and more powerful than its predecessors. The Pi is essentially a credit-card-sized PC that sports a quad-core processor, dual-band wireless LAN, and Bluetooth, but you don’t need to be a computer programmer in order to turn the device into a litany of handy (or novelty) gadgets. We’ve even compiled a few projects you make with this Raspberry Pi model right now.

The phrase “set and forget” is music to the ears of anyone who wants to make a home-cooked meal with little hassle. Thankfully, you can program Hamilton Beach’s slow cooker to cook your dish for a specified time, and the device will automatically change the temperature to keep the contents warm once it reaches said time. You can also insert a probe into your dish and set an internal temperature for the slow cooker — the device will automatically keep your food warm when it reaches the designated temp. Cooking gadgets are rarely as easy to operate (or cheap).

If there’s one power tool every person should own, it’s a Dremel. It’s basically the Swiss army knife of the power tool world. With the right attachments, these machines can do practically anything — cutting, sanding, polishing, carving, and everything in between. This set comes with a small assortment of attachments to get you started, and if that’s not enough, the tool is compatible with a gazillion more attachments that Dremel makes. Be careful, though. Power tools are a slippery slope, and Dremel is a gateway drug. If you’re not careful, you could wake up a year from now with a table saw and a laser cutter in your garage, wondering where your life went.

The market for budget headphones is steadily growing, with decent offerings from the likes of Panasonic and Audiofly at the forefront. Nonetheless, Shure’s SE112 earbuds remain one of our favorites for the price. They produce an admirable level of detail and benefit from respectable passive noise cancellation, while sporting solid construction nearly everyone can stand behind. Subtle textures and instrumental separation are far more clear than one might expect, too, even if the upper registry proves a bit too snappy at times. The fact that they’re relatively comfortable is just a plus.

We’d be remiss not to include Amazon’s Echo Dot in our list. It does everything its bigger (and more expensive) brother does, only it’s slightly larger than a hockey puck. It’s not as loud as the standard Echo, but the third-gen device still emits decent sound for its size. It can also connect to any audio system, is capable of far-field voice recognition, and boasts a wide range of features and functions. This gizmo is compatible with dozens of different smart home devices as well, which means that if you get one, you’ll potentially be able to control your connected fixtures via voice commands.

Phones and keys are two objects that we can’t help but misplace from time to time. Fortunately, the Tile Pro is specifically designed for such occasions. The small, squarish device attaches to your key ring, and using a mobile app, users can ping the device and cause it to emit a loud sound from up to 300 feet away. If you misplace your phone, you can also double press the button on the Pro to make it ring (even if it’s on silent). The newest model even features a replaceable CR2032 battery, which can be swapped out in a matter of seconds.

Whether you’re tending to livestock in the early morning, venturing deep underground on your latest spelunking expedition, or heading out on your favorite trail for a nighttime jog; this 300-lumen headlight has the guff to get you through the stuff. In addition to multiple light modes, the Spot boasts a memory feature, so when you turn the headband back on, it’ll be at the same setting you left it on. Even up against more expensive headlamps, this waterproof offering is still one of the best ones on the market right now.

Do you hate that mounting feeling of anxiety that sets in when your phone battery starts to get low? Always need a charge and never near a charger? The Anker PowerCore 20100 may be your new best friend. Despite its pocket-friendly size and lightweight build, this little beast packs some serious heat (not in an explosive way, though). It also boasts enough power to fully charge your smartphone six times over, as well as multiple charging ports, rendering it one of the best chargers you can currently get your hands on.

Looking to jam out while you’re on the move? The Oontz Angle 3 has the power and portability to make that happen. This slick, triangular boombox boasts a beastly 20-hour battery life, water resistance, and a built-in mic for making hands-free calls. If you like it enough to get two, you’ll be delighted to know that you can use them together by utilizing the “Dual Stereo” functionality, which will allow you to play music through both, simultaneously, from up to 100 feet away.

If you want to use clean solar energy in your home, your only option is to get some solar panels installed — right? Wrong. Thanks to this ingenious little device, you don’t necessarily have to be a producer of solar energy in order to be a consumer of it. How? It’s a bit complicated to explain, but here’s what’s going on (for a fuller description, jump over to our full article on SunPort).

Once you plug it in, the SunPort measures the electricity you draw from your wall outlet, and automatically upgrades it to solar power by purchasing small fractions of a solar renewable energy certificate. That’s the magic of it. Certified SRECs generally represent an entire megawatt-hour of electricity (a sizable and relatively expensive chunk of power), so to make them more accessible to individuals, SunPort has developed an ingenious way to break them up into microcredits (called SunJoules) that you can use on a smaller scale. This happens automatically when you use the plug. To be fair, using SunPort doesn’t technically increase the amount of solar power being generated in the world. But it does something almost as good — it increases demand for solar power, which ultimately translates to more solar farms being built in the future.

#MondayMotivation from the CEO of REI, Jerry Stritzke