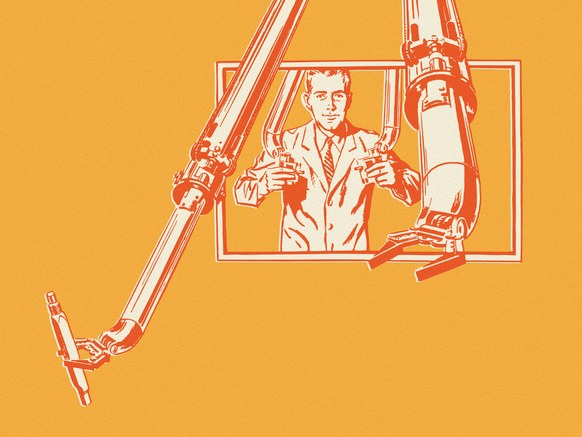 Musing on the future of the economy earlier this year, Bill Gates warned of smart machines replacing human workers and suggested a tax on robots. A new study of how technology is changing American jobs suggests workers are most immediately challenged by more common technology that Gates himself bears much responsibility for, such as Microsoft Office.

The new study from the Brookings Institution used government data on work tasks to track how use of digital tools changed in a wide range of occupations between 2002 and 2016. Use of digital technology, such as computers and spreadsheets, became more important to occupations of all kinds. But the most dramatic changes were felt in jobs traditionally least reliant on technology skills—think of home health aides and truck mechanics using computers to diagnose problems or record their work.

The Brookings’ study created a “digitalization” score for 545 occupations covering 90 percent of the economy, using government survey data that asks workers about their knowledge of computers, and how much they use them. In 2002, 56 percent of jobs scored low on Brookings’ digitalization scale; by 2016, only 30 percent did. Nearly two-thirds of new jobs created since 2010 required high or medium digital skills, the report says. That shift is problematic given America’s long-established deficit in basic digital skills, such as familiarity with spreadsheets or other workplace software, where US workers score well below other those from other advanced economies.

Overall, the Brookings report suggests the window of opportunity for workers without basic digital skills or a college degree is closing. “With the availability of jobs that require no to very low digital skills dwindling, economic inclusion is now contingent on digital readiness among workers,” says Mark Muro, a senior fellow at Brookings who led the study. “While tech empowers it also polarizes.” He recommends that companies, government officials, and educational groups invest in programs that train workers in basic digital workplace tools.

That diagnosis and proposed remedy stand in contrast to two common prescriptions for how to help the US economy adapt to technological change. Gates and many other tech executives suggest new government programs to support workers displaced by a coming generation of smart robots. In recent years there has been a swell of support, including from the Obama administration, for programs that teach people to code.

The new Brookings data suggests the US faces a more immediate, and perhaps less glamorous task. “Coding for all is not quite the right model,” says Muro. “It’s less sexy, but we need much broader exposure and mastery of humbler, everyday software.” Maybe not everyone needs to be a code slinger, but word processing and enterprise packages like Salesforce are hard to avoid.

Google CEO Sundar Pichai made a similar argument last month, when he launched a $1 billion educational program focused on helping workers skill up in workplace technology. Google employees will offer training in cities around the US. Naturally, they’ll highlight products such as GSuite, Google’s competitor to Microsoft office.

The digital-skills crunch has been a long time brewing. Erik Brynjolfsson, director of the MIT Initiative on the Digital Economy, says that IT’s impact on US businesses surged in the mid-to-late ’90s—not coincidentally around the same time US median wages began to stagnate. In 1996, President Clinton announced a “national mission” to make all US children technologically literate by 21st Century. The Brookings report shows there is still a way to go. “We could have done a lot better,” says Brynjolfsson.

Brynjolfsson echoes Muro’s call for better educational efforts to widen the pool of workers with basic digital skills. He also says society’s poor track record at adjusting to the digital age shows we should be starting now to prepare workers for the next big shift, in which machines become capable of many tasks now done by humans. He recommends that, in addition to productivity software and coding skills, workers should be encouraged to develop their creativity and emotional intelligence—faculties believed to be among the toughest for software to acquire.

Jason Kloth, CEO of Ascend Indiana, an industry-led group that tries to improve workforce skills, generally agrees with Brynjolfsson’s long-term predictions that advanced automation will challenge workers of all kinds. But his organization has more immediate concerns. “We need to close the gap between demand and supply in the labor market today,” he says.