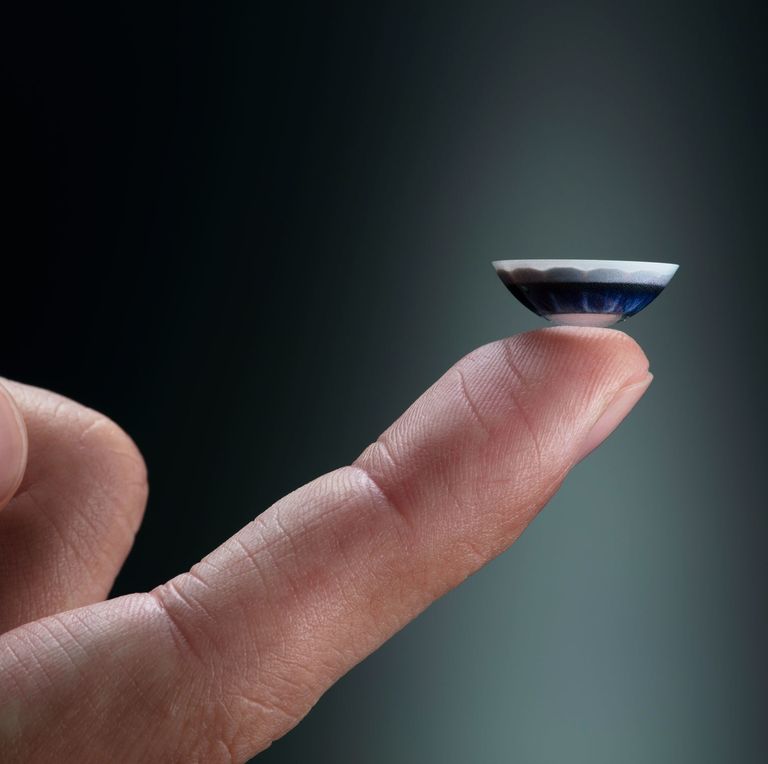 Mojo Vision promises a 14,000 ppi display on your eye

A new Silicon Valley startup is trying to build the “world’s first true smart contact lens,” putting a screen right against your eye that can enhance your vision of the world. The startup, Mojo Vision, showed off a very early prototype in meetings at CES last week and is now ready to start talking about the product’s development.

Mojo Vision hopes to first create a smart contact lens that can assist people with low vision by displaying enhanced overlays of the world, sharpening details or zooming in to help them see. But that reality seems to be a ways away. The prototype shown at CES included a green, monochromatic display that was wired to a large battery, and the company still needs to get approval from the Food and Drug Administration to eventually ship to consumers, particularly for its medical use cases.

Mojo’s tech is built into a hard scleral lens, which has a bulbous portion that sits slightly above the surface of the eye. Mojo Vision claims to have a 14,000 ppi display (the iPhone 11 has a 326 ppi display, for comparison) as well as an image sensor, radio, and motion sensor that will be built in to help overlay and stabilize images. While Mojo showed off a lens that it says includes all of those components, we didn’t demo a fully working unit. The display technology seemingly worked when held close to the eye — we weren’t allowed to insert it — but it required an external battery and processor to run. The company says people would have to disinfect their contacts nightly and that it’d recharge through a proprietary induction system.

As part of the demo, Mojo demonstrated how a display placed over a person’s eye could help them see in the dark, especially if a person already has low vision. The demo relied on an edge detection algorithm to show off where objects were placed in a room. It worked, but again, the contact was on a bigger base and not working within the tiny form factor.

The ultimate goal is to make the contact a little bit like what Google Glass was supposed to be: a screen that can show you “useful and timely information” without forcing you to pull out your phone. With its much tinier size, a smart contact lens could avoid a great number of the social hurdles Google Glass initially faced; it just has the far more difficult challenge of building its tech into an object tinier than a penny. The company says people will likely have to wear an extra accessory that would provide the data connection and processor for the contacts, and the team also suggested that people would use eye tracking to control what they see. I demoed eye tracking software while wearing an HTC Vive VR headset to get a sense of what the UI could look like and found the eye tracking to be exhausting. The team says people get used to it, but I had a headache after only a few minutes.

Mojo Vision imagines its smart contact being sold to both consumers and businesses, with the earliest versions helping people with vision impairments. The company has raised more than $100 million in funding to build its tech, but for now, it remains in development. There’s no exact timeline for when it expects the first smart contacts to hit the market. although Mojo says it hopes to have product released within the next two years.

Ultimately, Mojo could run into the same pitfalls many wearables face: issues with interoperability between platforms. Its use case for people with vision impairments is unique and potentially useful, but for the broader consumer audience, it needs legitimate justification to make people want to wear the contacts every day. (The company wouldn’t say how much it’s thinking these contacts would cost, but it did say people would need to replace them every year.) Connected contacts could be useful for Android users who want notifications in front of their faces and don’t want to wear AR glasses. But like any other wearable, Mojo could struggle when it comes to iPhone users who want access to iMessage.

Mojo has seemingly accomplished one of its biggest hurdles — embedding a tiny display on a contact lens — but it still needs to prove that the tiny form factor can function on its own and, beyond even that, prove that society is comfortable with the idea of AR contacts.

Ekoru.org is the New Search Engine that Helps Clean and Reforest Our Oceans