This Walking Package-Delivery Robot is Now for Sale 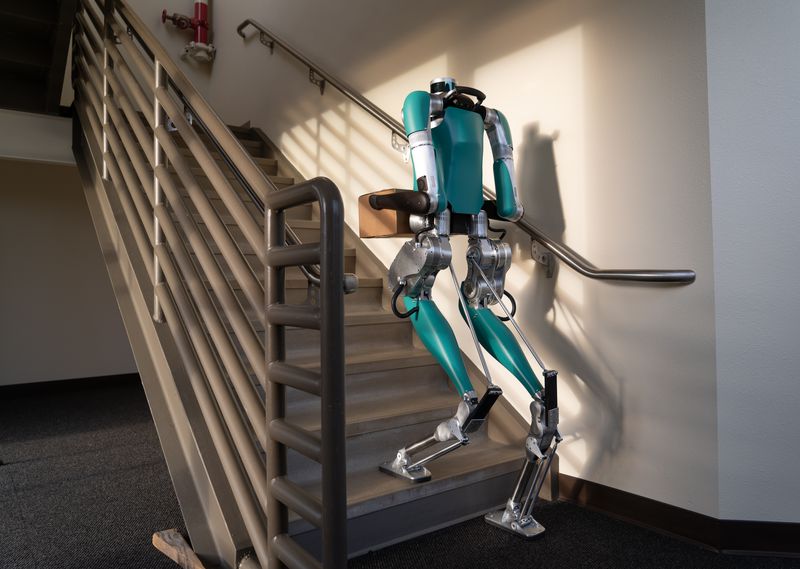 US startup Agility Robotics has announced that its bipedal robot Digit is now for sale, with the first two units bought by automaker Ford to research last-mile package delivery.

Digit is approximately the size and shape of a small adult human. It’s able to navigate environments semi-autonomously with the help of LIDAR and other sensors, and it can carry boxes in its arms up to 40 pounds (18 kilograms) in weight. Agility Robotics says it can be put to a range of uses, including in logistics, warehouses, telepresence, and industrial inspection.

But companies will need to find out for themselves how well Digit can manage these jobs. Although mobile, multipurpose robots have improved dramatically in recent years thanks to advances in battery and navigation tech, they’ve yet to prove themselves at scale.

Digit can perform some operations autonomously, but it’s not able to adapt to new environments as easily as a human. In the video below, you can see a recent version of Digit picking up and carrying a box. In an interview, Agility Robotics said the picking is done “fully autonomously,” but the robot had to be steered through the office by a human:

Digit is now available for an unspecified launch price in “the low-mid six figures,” CEO Damion Shelton tells The Verge over email. When factoring in upkeep and the robot’s expected lifespan, Shelton estimates this amounts to an hourly cost of roughly $25.

“This represents a ‘fully operational’ price,” he says. “[Customers can] pull Digit out of the shipping case, charge, power it on, and start developing/using.”

Digit has the potential to be useful in a wide range of industries and sub-markets, says Shelton. “For example, indoor logistics can look like warehouse/stockroom work, or moving containers of parts in a multi-level cleanroom,” he says. “Inspection includes both dedicated inspection (as in a railyard or factory) or incidental inspection like monitoring city infrastructure (telephone poles, etc) while performing a delivery task.”

And what about law enforcement or military? Could we one day see Digit with a badge and a gun? Well, a badge perhaps, but definitely not a gun. Shelton says Agility Robotics will sell to these customers but only for non-weaponized functions.

“We won’t allow Digit (or other Agility robots) to be armed with either lethal or non-lethal weapons of any kind,” he says. This includes weapons for non-human use, like those used to destroy IEDs, and sales to organizations that might want these capabilities “will include a contractual clause in the sale preventing them from doing so.”

It won’t be surprise, though, if such customers are interested in Digit. The bot’s predecessor, Cassie, was developed with DARPA funding to create a scout robot. And Shelton says there’s an “ethical argument” for using non-weaponized robots in the military.

“Agility supports the development of an international body of law surrounding use of robots in combat or ‘combat-like’ scenarios,” he says. “I’d strongly prefer this decision be in the hands of governments, and by extension, humanity at large, rather than left to tech companies to muddle through.”

It’s delivery that looks to be the first proper test for Digit, with Ford buying the first two units to continue a research program using the robot it announced last year. The automaker says Digits could be placed in the back of self-driving delivery vans and tasked with dropping packages in front of customers’ houses. This would take advantage of the robot’s bipedal design, which allows it to navigate human environments, including steep stairs and obstacles.

In a press statement, Ford’s chief technology officer Ken Washington said that robots like Digit would help the company make deliveries “more efficient and affordable” for its customers in the future. “We learned a lot this year working with Agility, now we can accelerate our exploratory work with commercial Digit robots,” said Washington.

Digit is being produced in extremely small quantities, though, underscoring its experimental nature. The first production run is for just six units, and Agility Robotics expects to make only 20 to 30 bots throughout 2020. The company says this rate will at least double in 2021, but even then, robots like this won’t make a dent on the job market for years to come.

Nevertheless, the commercial launch of Digit is a significant milestone. Technology advances are enabling a new generation of mobile machines, including Boston Dynamics’ quadrupedal Spot, which became available to customers late last year. But bipedal machines are much less common than their quadrupedal counterparts, and Digit is the first bipedal robot of its size to be sold commercially (rather than leased for academic research).

The real challenge will be seeing how useful robots are in cluttered and unpredictable working environments. Reports of similar integrations — like the placement of cleaning bots in supermarkets, for example — suggest these machines are as likely to create work as they are to help humans. Digit the robot can walk the walk, but can it talk the talk?

Meetups at Innevation are back, Check out the calendar for January!